Will an Assassin’s Creed slot ever be released?

With slots makers releasing multiple games every month, the choice in online slots has never been bigger. Providers like Netent and Microgaming are drawing inspiration from big hollywood movies and are becoming increasingly better at recreating the atmosphere in their slots. Some examples of franchise slots:

You need only take a look at Netent’s Aliens slot to see how adept they are at incorporating key elements of a franchise to get that authentic vibe.

We feel it is only a matter of time before games start showing up in slots. One of console gaming’s biggest successes in recent years is the Assassin’s Creed franchise that started out with the first installment on PC and Playstation 3. The game was revolutionary for its’ sci-fi elements and double plot setup: one story arc revolved around a deadly assassin named Altaïr ibn-La’ahad, who lived in the Holy Land during the crusades.

Another plot thread running simultaneously centeres around a bar-tender named Desmond, who is one of the modern day ancestors of Altaïr. He is abducted by the shady Abstergo corporation who put him in a machine that will allow test subjects to relive memories from previous ancestors that are stored in their DNA.

Desmond is thus forced to relive the life story of Altaïr as he rises through the ranks of the Assassin order while eliminating key targets in cities like Jerusalem and Acre. 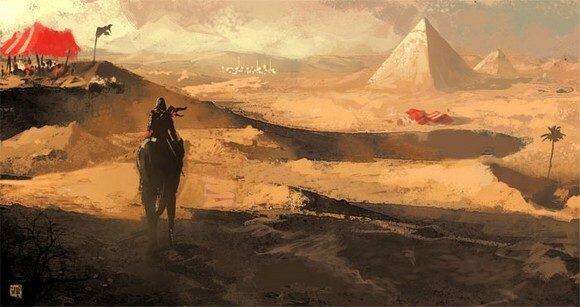 We’ve got plenty of ideas for a slot. Let’s start out with high variance, so big 100x or better payouts once you land a good combo with multiplier. On the reels we’d obviousely like to see the main protagonists from the AC games as premium symbols like Altair, Ezio Auditore, Connor Kenway and the Fry twins Evie & Jacob from AC: Syndicate.

Even cooler would be a slot based upon the upcoming Assassin’s Creed: Empire game (possible release Q4 2017) that is rumoured to be set in ancient Egypt around the time of the farao’s. We’d imagine the pyramids beeing built in the background, along with beautifully animated deserts and oases.

For our free spins bonus game you would be taking out a high profile target who hides in one of the farao tombs. Avoid deadly traps and snake pits to get closer to your target. Every spin of the reels can award a 1x boost in the form of an apple of Eden symbol (an artifact from an ancient civilization in the games) that is cumulatively added to your total stake multiplier.

Once you reach your target, pick one of three options: poison him, assassinate with hidden blade or shoot a crosbow bolt.

Our favourite is the original South Park slot from Netent. It is jam packed with surprisingly fun features that are sure to get a laugh out of you. Hunt hippies down with cartman or guide kenny across a road filled with dangerous objects. The further you make it without killing kenny, the bigger the prizes that can be won.