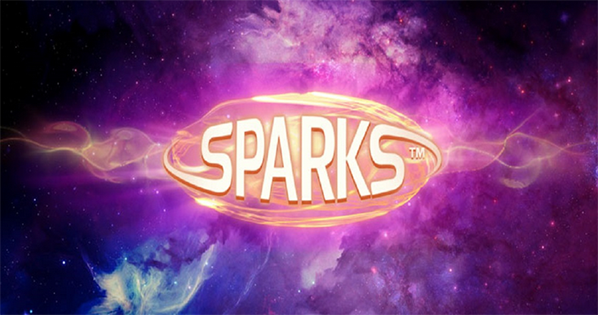 In seven days Netent’s new videoslot for July called Sparks will be released, so today we’re bringing you a preview of this electrifying online slot game. Find out about the special features and big win potential on Sparks: with two-ways to win, wild substitutors and stacking wilds you’re bound to hit something good!

Neon Staxx, Sparks and Dazzle Me summer slots
Netent kicked off the summer by releasing Neon Staxx in June: a fun new slot with beautiful animations and an exciting bonus round where the goal is to collect five reels full of wilds for a jackpot. While the feature turned out to be not that special, it has quite some potential to pay big because a single spin can win you up to 800x bet when you hit Super Staxx.

Next up for release in Netent Free Spins casino’s is Sparks, a slot built around electricity themed symbols and unique features including stacked and cloning wilds on the reels. Available on the 24th of July, Sparks will include some special design choices which we will detail further down the article.

Finally in August, players will be sinking their teeth into Dazzle Me slot, a great new addition that we wrote about ealier this month. It includes linked reels like TwinSpin and a shiny set of symbols similar to Starburst. For now, let’s focus on Sparks and find out why you should be looking forward to it.

Win two-ways by playing Sparks in special mode
One special feature in Netent’s latest slot is the possiblity to play and win two-ways, from left to right and vice-versa. Players can choose to play in classic one-way mode or activate both ways, meaning you will bet twice as much per spin but giving you the opportunity to make twice as many combinations on the reels and therefore achieve a higher hitfrequency.

Expanding and cloning wilds
Next up is an exciting feature called Cloning Wilds, which has never been seen before in online casino slots. The way it works is any wild symbol will have the potential to expand up-or-downwards and then clone symbols from others reels, thus providing larger combinations and bigger wins.

This feature will be triggered randomly, meaning it can occur everywhere across the playingfield to set you up for a big hit. Landing two of these on the second and fourth reels means you’ll be guaranteed five-of-a-kind combinations on all active paylines, which when combined with the highest symbols can pay out big prizes.

Free Spins bonus and scatters
Like most games from Net Entertainment, their latetst addition Sparks online slot will also feature a free spins bonus round triggered by hitting three or more scatter symbols. Players will then earn 10 free rounds where expanding and cloning wilds will be showing up and you have to possiblity to retrigger by hitting more scatters. Since their games make use of an RNG or Random Number Generator, every spin will be 100% random.

Sparks Touch for mobile phones
As of recent, Netent has been developing a second version of all their new slots, especially designed to be played on Mobile phones and Tablets. This is called the Touch-platform and what it means is you’ll be able to enjoy their games in exactly the same way as you would on a desktop computer. Simply log in to a Netent casino on your phone, select your favourite slot (over 50 are already available) and start winning!